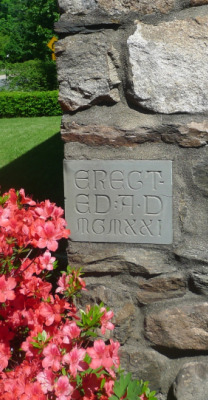 As a result, in 1888 John Jay II, the grandson of Justice John Jay, the first U.S. Supreme Court Justice, made a codicil in his will leaving $500 for the erection of an Episcopal Church in Katonah.

The mission of St. Luke's began in 1916; initially meeting in the old Katonah Movie House and then in the storage warehouse in the village. In 1921, St. Luke's petitioned St. Mark's in Mt. Kisco to formally adopt St. Luke's as a parochial mission. That same year, on October 21, the cornerstone for St. Luke's Church was laid.

Designed by the acclaimed Church architect, Hobart B. Upjohn, St. Luke's is an English Tudor stone and half timbered structure with a copper spire and slate roof. Today it is landmarked by the National Register of Historic Places.

St. Luke's has been a self supporting parish in the diocese of New York since 1958 as we continue to serve the Living God. As followers of Christ, St. Luke's is a faith community and parish family that lives out a personal and collective commitment to the Gospel of Jesus Christ through worship, fellowship and outreach to the community and the world.